Christmas and New Year in Hokkaido 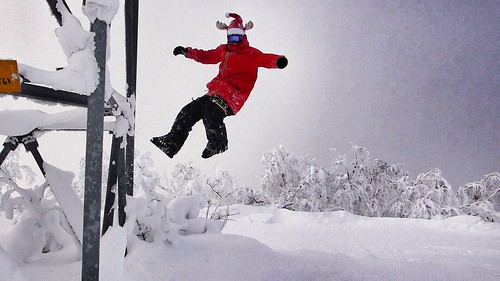 What an epic couple of weeks! Usually over Christmas and New Year we take a couple of weeks off to travel somewhere outside Japan. This year, we took the time off, but stayed in Hokkaido to travel around with a few friends and ski. 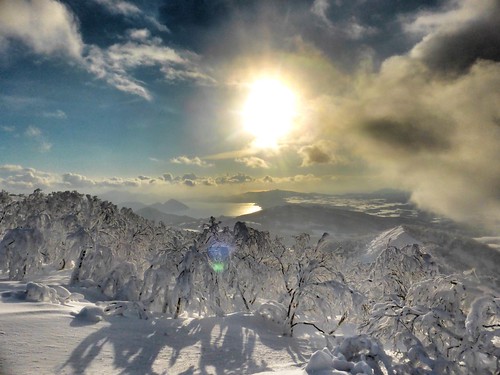 Lake Toya and the Pacific from Rusutsu on Christmas Day

There’s no denying we had a slightly slow start to the season this year, and this was very apparent at Rusutsu over Christmas from the amount of sasa bamboo and tree branches still poking through the snow. But the snow started really cranking when we arrived on Christmas Eve, and just didn’t stop. It got so good that we decided to book another night in a hotel there to squeeze in an extra day skiing as the snow was so damn good. 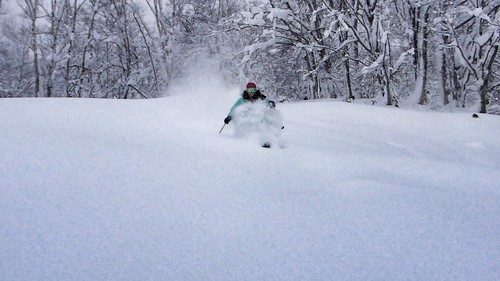 Big smiles and freshies at Rusutsu 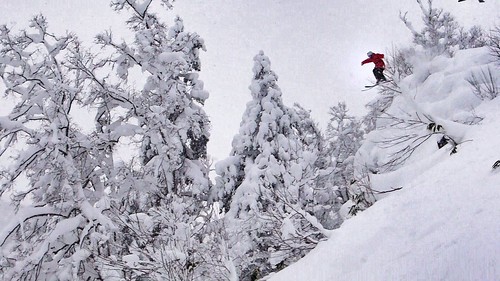 Sending it off the big side of Hollywood Cliff at Rusutsu 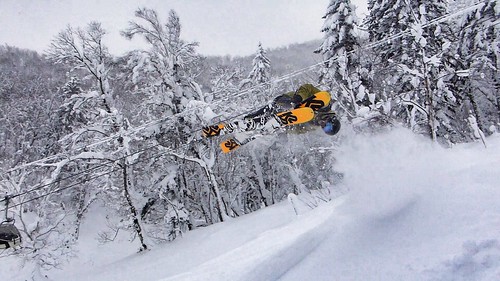 Cory getting off axis under the chair at Rusutsu

After Christmas we had friends, James and Daphne, arriving from the UK. We’d lined up a mix of Sapporo before New Year followed by a trip up to Asahikawa for a couple of days in early January. 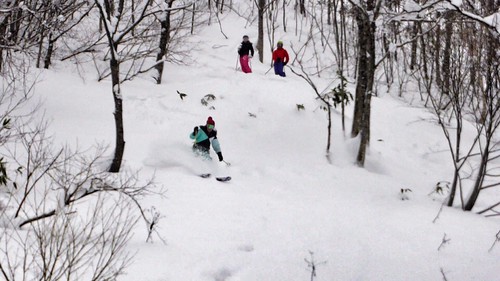 Initially the snow at Teine was up there with the best snow they’d ever had in Europe, although to us it was decidedly average. We still had fun picking our way through the trees to find decent powder stashes, but unfortunately it wasn’t the best Teine has to offer. 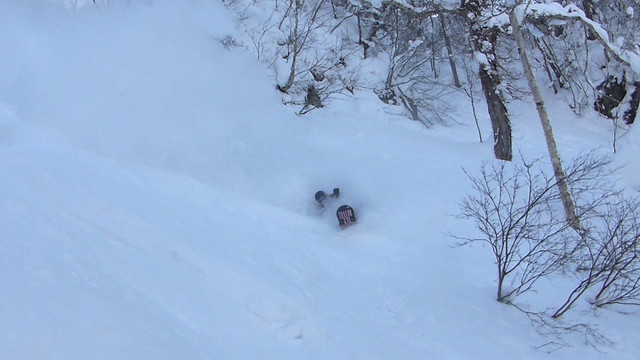 After a big night out on New Years Eve, and a mellow New Years Day, we drove up to Asahikawa. On the first day at Kamui Ski Links the snow was good and a lot lighter than Teine. We hit the backside and the lines down the spine under the gondola. Even with relatively long lines for the gondola, the trees and backside areas remained largely untracked. 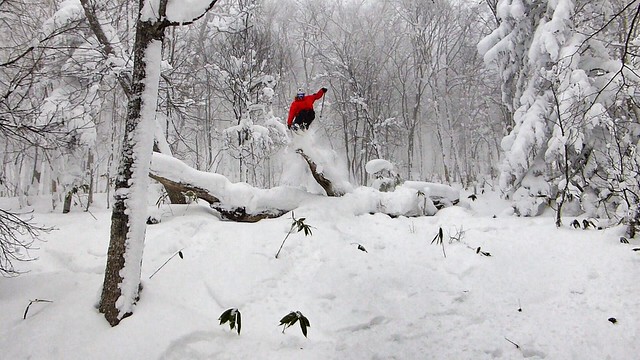 By day 2, after a solid night of snowfall Kamui was even better. The snow was really deep and confidence was soaring. Some bigger drops were going down, and pillows were getting boosted with deep soft landings. 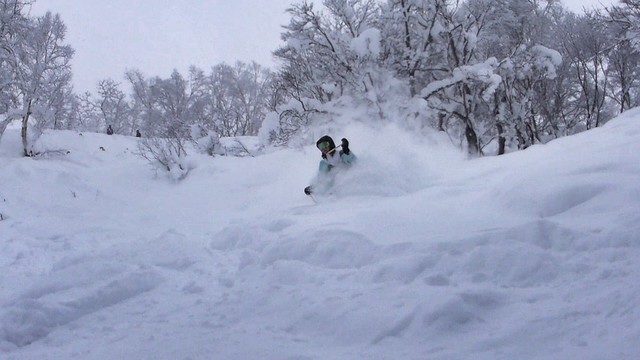 Deep powder on the backside of Kamui 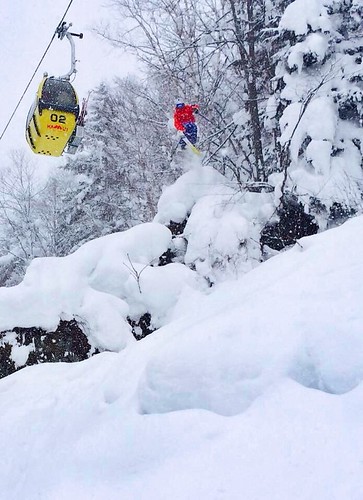 Classic drop under the gondola at Kamui

Heading back home from Iwamizawa, we caught the negative side of Hokkaido’s insane snowfall. The Expressway was closed and the main north-south road was gridlocked thanks to 1 metre of snowfall in Central Sorachi. Eventually we got home and dug ourselves back into our parking space. Looking around at all the fresh snow, we figured that the following day, the last of the holidays, would be a pretty good time to hit Mount Racey at Yubari.

It turned out to be one of the best days we’ve had in Hokkaido. The snowfall in Iwamizawa area had continued Eastwards and intensified as it hit the mountains at Yubari. The ski area got absolutely pounded and to top it off, the sun came out in the morning to give us the dream combo of snow and sun. Lap after lap on the gondola gave us chest deep blower powder in the trees and incredible faceshots in the steeper terrain in Happy Valley. A perfect day to round off James and Daphne’s trip and one for us to remember for a long time. 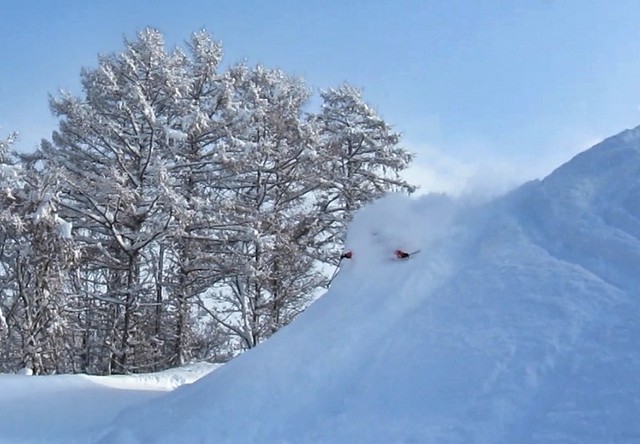 Faceshots on the Roller Coaster, just metres from the piste at Mount Racey 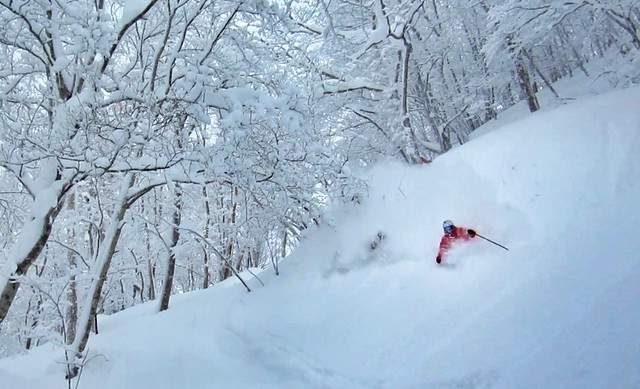 Deep in a zone called ‘Joy Division’ at Mount Racey

I took a load of video over the 2 weeks, and will try to edit it down into something watchable. Hopefully. For now, here’s a mini edit from an insane day at Mount Racey.

Back to ‘work’ and ‘reality’ as of yesterday. But we have a three day weekend coming up and another big snowstorm brewing tomorrow…….

North to the Links

We headed north this weekend, following the snow. Driving up through Sunagawa and Takikawa, the snow was pounding down so it looked like we’d made the right call.

Arriving at Kamui Ski Links, near Asahikawa, there was still a real lack of snow low down, but higher up we could see the trees loaded down with fresh snow. Kamui is a gem of a hill, with loads of tree skiing and rarely any crowds. We know the place well having spent a lot of time there and we always seem to run into a few Asahikawa locals who are keen to shred. Today we met up with the southern hemisphere boys, Ross from South Africa and Andy from Oz.

Looking up from the base at Kamui. Lots of bare patches still showing.

From the top of the gondola, only a couple of runs were officially open. Of course, they were tracked out very quickly. But, turning left out of the gondola and ducking the rope gave us several options of wide open untracked trails, running all the way down to the base of the mountain.

Ross powering down the closed trails

Despite the sketchy bottom section, our boards and skis remained unscathed. We continued to lap the gondola getting fresh lines every time.

Anything the snowboarders can do…

Clare getting in on the action

An awesome day, but sadly my last for 2013. Operation on Thursday then a trip to the UK. We’ll be back in January, all healed up and ready to go. By then, the snow will have filled in all of the off piste areas, and we’ll be hitting some genuine Ezo pow!