For the second half of this winter, I was riding new skis. Thanks to a random meeting in a ski bum bar in Sapporo on New Year’s Eve, I got talking with the owner of Riot Skis. I was wearing an Ezopow hoody and as he’d seen our Instagram and site, he wanted to know about us. In talking, we decided to work together with a view to launching Riot Skis in North America and Europe over the coming years.

Riot Skis are a Japanese company based here in Hokkaido. They make really unique skis which are aimed predominantly at freeride and freestyle. Their main pro rider, Tsubasa ‘TBS’ Tanimura is a style ninja with a unique flow to his skiing that I really haven’t seen in many other skiers. He’s the main influence on the design of the skis, which are super fun to ride.

I’ve been riding the IMK which is the widest ski in the lineup and suited to my preferred playground, the powder and trees of Hokkaido. Currently the models have been designed with the Japanese body shape in mind, so mostly in shorter lengths. We’ve been working on the range, to include longer lengths in all models, and wider designs too. Big things to come.

The biggest thing happening for Riot recently has been signing Canadian pro skier Corey Vanular to the team. This is super exciting and will bring awareness of the brand and the skis to a huge audience. I’ve been a huge fan of Corey’s style ever since he was in the early Level 1 movies from winning the Superunknown contest. His segment in Long Story Short has to go down as one of the most stylish 90 seconds of skiing ever recorded.

As of now, the Riot website is still under construction, but a full launch is imminent. Keep an eye out for Riot Skis in the coming years.

Is what I said to my friends Sam and James when they were planning a trip to visit us in Hokkaido. I should’ve known though. The last time all three of us were on a mountain together was 10 years ago in Whistler. That year, the Pineapple Express hit, giving us rain, wind, and generally crap snow for the majority of our 2 months in BC. 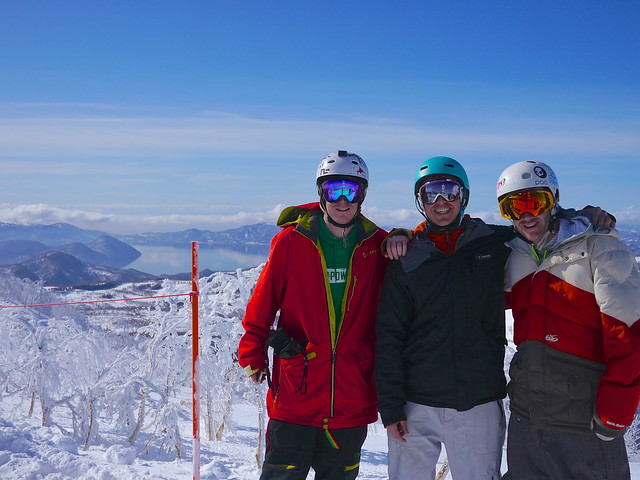 This time would be different though, wouldn’t it? It’s Hokkaido after all. Well, we had a bit of snow, but generally nothing like you’d usually expect for February. Pretty disappointing for Sam and James to have travelled from Hong Kong and the UK respectively for not amazing snow, but we had a good couple of weeks and made the best of a bad snow situation. 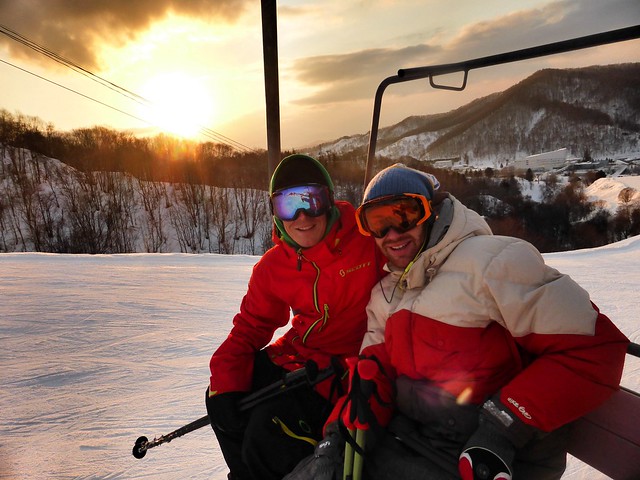 Straight from the airport we headed to Mount Racey. Not much powder but we gravitated towards the park like the park-rats we used to be! We were treated to a classic Yubari sunset to welcome the boys to Hokkaido. 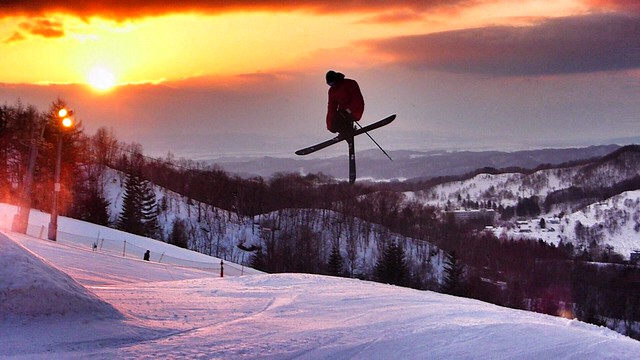 We had a good couple of days down in Rusutsu. A little bit of fresh snow to keep the trees interesting and an amazing bluebird day with views of Yotei, Lake Toya and the Pacific Ocean. Plus a sweet night park session, with confidence boosted by the addition of chairlift cans of Sapporo Classic! 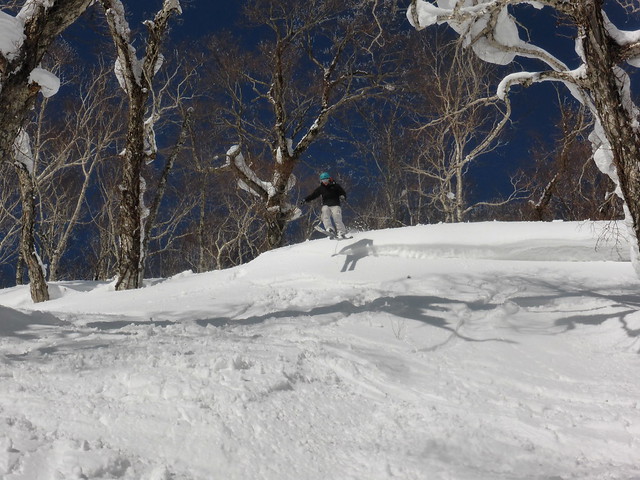 Sambo dropping a cornice at Rusutsu 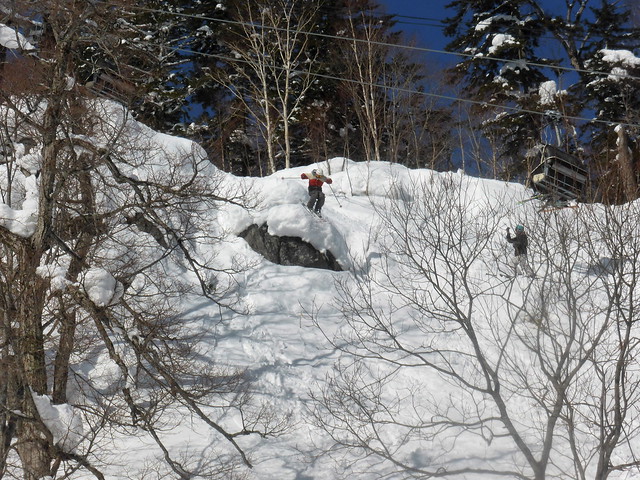 James taking on a side hit on Hollywood Cliff at Rusutsu 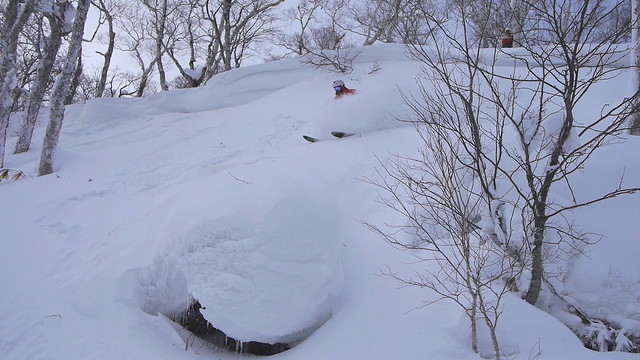 We were able to scope out some decent stuff at Teine too. The less obvious lines in the trees and out in the bowls were still fun, even without recent snow. And the park was also always an option! 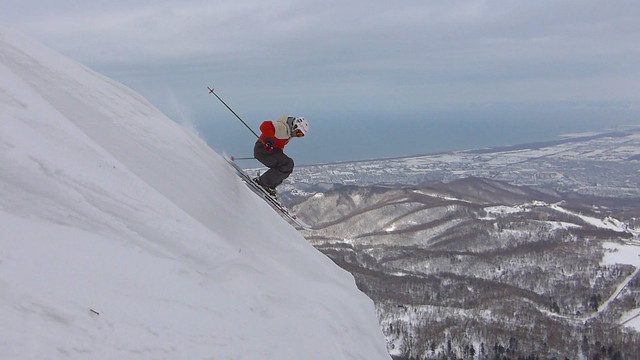 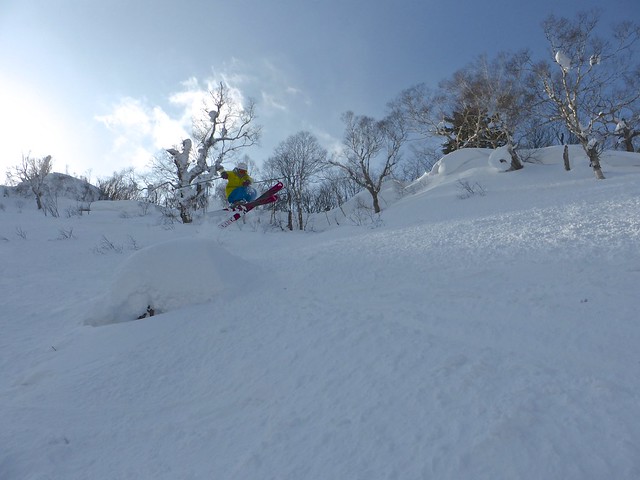 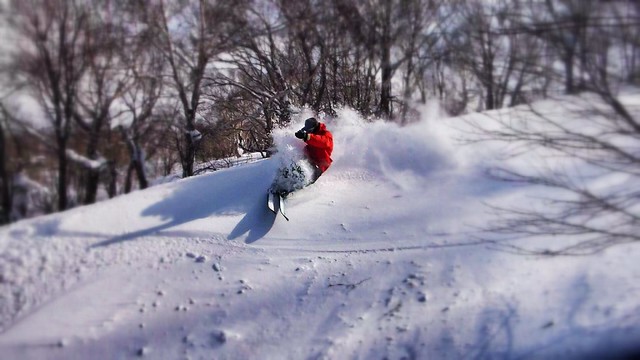 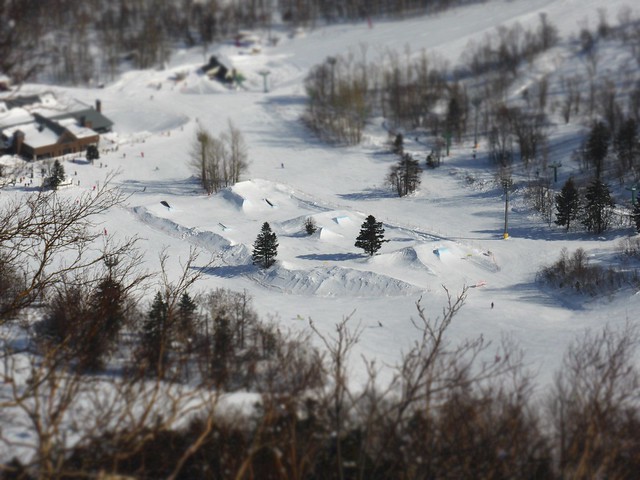 If all else fails, there’s the park 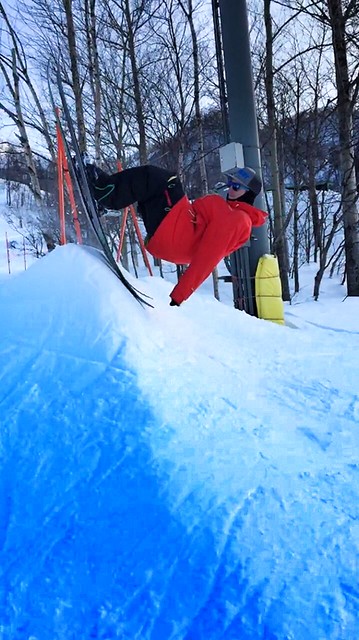 We had a random half day at the unheard of Bibai Kokusai Ski Hill. (Kokusai means international in Japanese. Interesting choice of name for a one lift ski hill in a dying former mining town!) It actually turned out to be a great time though. We found lots of short but fun lines through the trees, some powder and even a park! And other than a few army dudes in leather boots, we were the only ones there. 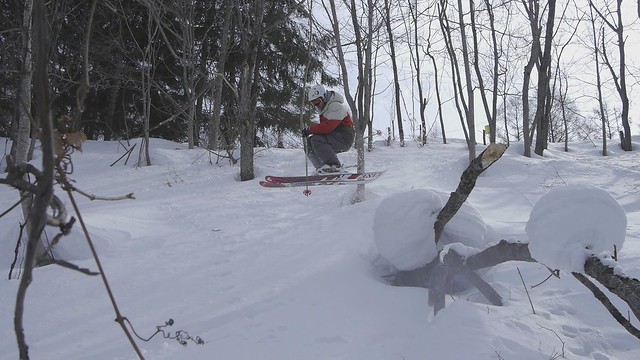 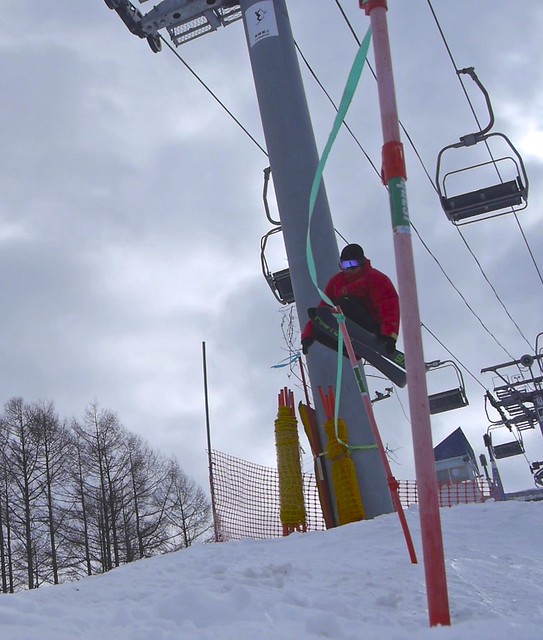 The ribbon jump at Bibai. We got shouted at by the lifties for this!

Sam headed back to Hong Kong slightly earlier than James, leaving us to have a sweet final park session at Mount Racey. A sunny day, with no crowds had us lapping the park with the essential Go Pro on a pole. 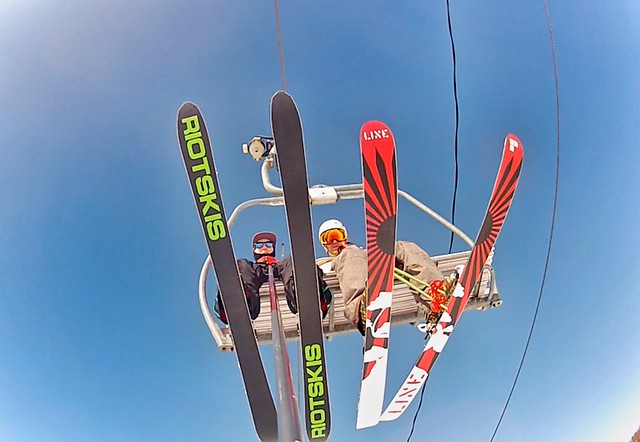 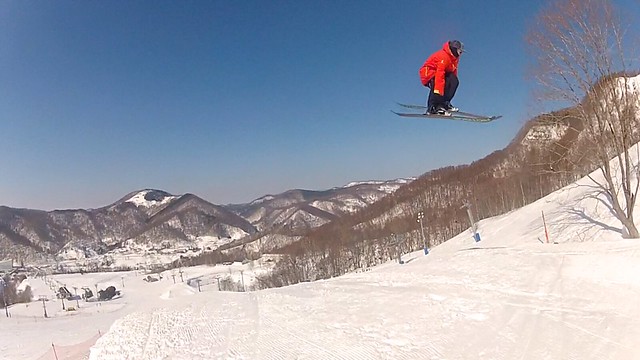 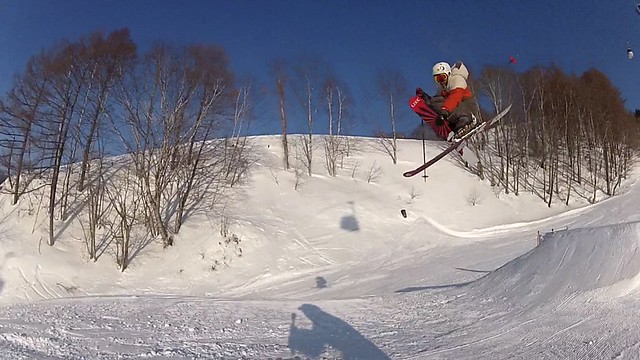 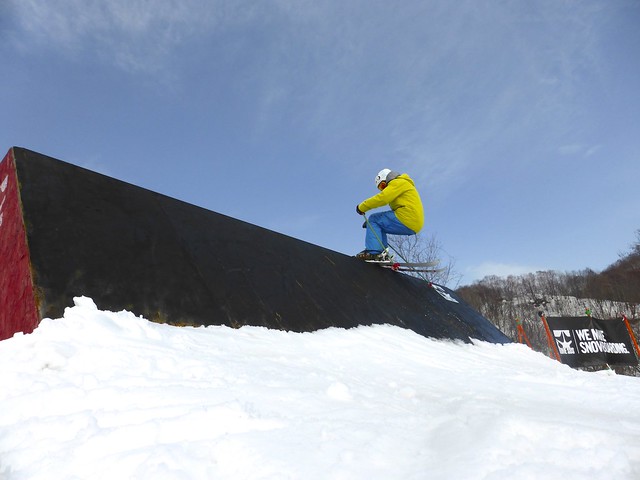 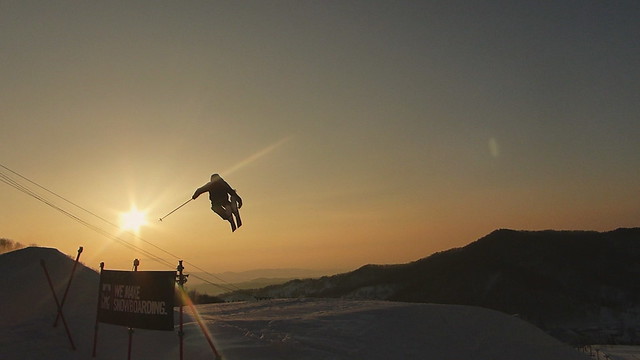 Thanks for coming out to visit boys. Now Sambo, you’ve got all the footage, get working on that edit!!

So February has been pretty crap in terms of snowfall! Not really much more to say than that. We’ve had friends visiting from the UK so have been travelling around trying to get the best out of the bad snow situation. Sometimes, that meant just skiing park! Here’s an edit from a beautiful sunny day lapping the park at Mount Racey

Finishing the Season at Nakayama Touge

We finished off the 2013/14 season just before Golden Week with a park session down at Nakayama. This is where we had our first lift served day almost six months ago. A very different vibe down there this time. T-shirts, sunglasses and park hits were the theme of the day. The park setup was looking really nice, a solid jib line and small rhythm jumps high up, leading down to a couple of nice large step down jumps lower down.

Two large step downs at the bottom of the park

It was fairly busy with local riders getting their last fix for the season. There was some real talent on show, especially some of the young rippers, probably half our age but going twice as big!

Local kids lining up to hit the bottom kickers

We had a good days riding though, slowly building up to hitting the biggest features and finishing off the season on a high.

Mike spinning and getting corked

Down at the bottom of the slope were a load of different demo tents and the smell of grilled meat wafting from the numerous yakiniku BBQs. A very pleasant way to spend a spring day.

So that’s it for the resort skiing, but definitely not the end of the season. There’s still turns to be earned with some spring touring. Even with the super warm weather we’ve had in Hokkaido through May, the snow sticks around in the hills for weeks after the lifts stop turning. Stay tuned!